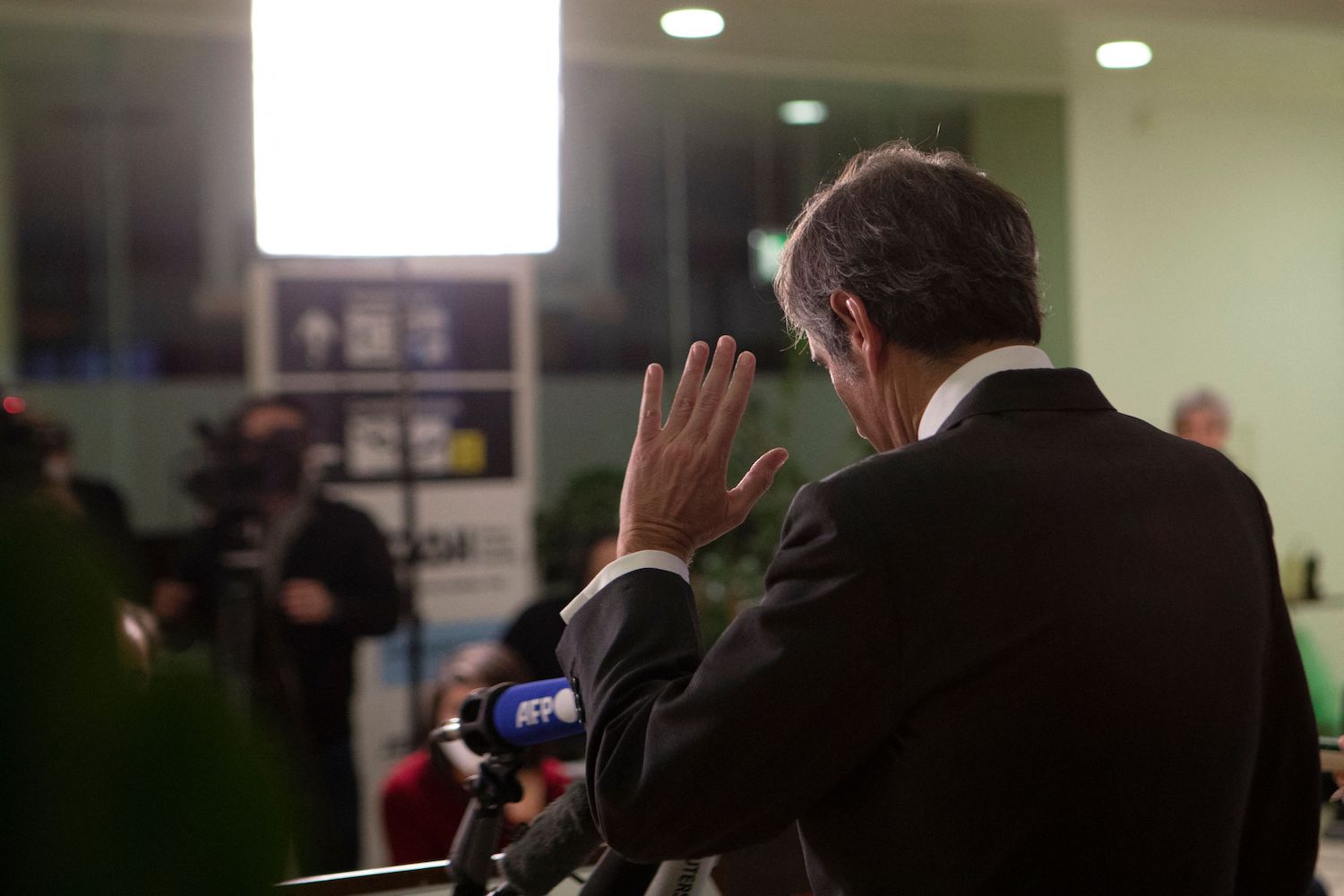 The board of governors of the International Atomic Energy Agency meets today in Vienna, with tensions high at the U.N. watchdog over lingering questions surrounding Iran’s nuclear program.

The United States and the three European members of the board—France, Germany, and the United Kingdom—are expected to introduce a resolution to issue Iran with a formal rebuke, something it has only done once since the Joint Comprehensive Plan of Action (JCPOA) was signed in 2015.

Today, Western powers are concerned that Iran is not cooperating closely enough with IAEA inspectors, and has not provided satisfactory answers when questioned on uranium traces found at three undeclared sites.

Faced with a similar situation last year, the IAEA’s Western board members decided against a censure, so what’s changed?

“Last year, the can was kicked down the road multiple times and the reason was that there was hope that the JCPOA could be restored,” Ali Vaez, the Iran project director at the International Crisis Group told Foreign Policy. “Now, with the momentum completely lost, and the mood that has significantly soured in the past three months, there is less to lose.”

It’s also a matter of reputation for an agency charged with tracking the world’s nuclear material, Vaez said: “Iran had an agreement with the IAEA back in March to resolve these issues until the June board meeting and it has failed to do so. And so if the board does not take action right now, it basically undermines its own credibility.”

Russia and China have warned against passing the resolution, saying it risks crippling the already shaky chances of renewing the 2015 nuclear agreement. Russia’s representative in Vienna, Mikhail Ulyanov, has called the resolution “senseless,” saying it would needlessly worsen relations between the IAEA and Tehran.

Chinese Foreign Ministry spokesman Zhao Lijian warned against making any “confrontational moves” saying they “undermine cooperation between Iran and the agency and disrupt the negotiation process.”

Unsurprisingly, Iran has also warned against it, with Foreign Minister Hossein Amir-Abdollahian vowing an unspecified “proportionate, effective and immediate response” to any rebuke.

Vaez holds out hope that despite the freeze in negotiations, a strong Iranian response—particularly ramping up its enrichment activities—might, paradoxically, speed efforts to reach a deal. “If there is a crisis as a result of the censure, it might actually jolt the parties out of the current state of limbo,” Vaez said.

The showdown comes as Iran is closer than ever to developing the fissile material necessary for a nuclear weapon (as FP reported in January, enriching the uranium is just the first step to actually making a deliverable weapon). Last month, the IAEA reported that Iran’s stockpile of 60 percent enriched uranium had now reached 43.3 kilograms, meaning a jump to 90 percent enriched uranium—weapons grade—could be only weeks away.

Iran’s oil. It also comes as the Biden administration may need Iran more than ever,  as it tries to convince oil producers to increase production in a bid to lower prices. It’s already provided an olive branch to Venezuela, easing sanctions, ostensibly to encourage opposition talks, and will soon allow two European energy firms to start shipping Venezuelan oil to Europe.

Iran’s oil may yet flow regardless of whether the nuclear deal is revived, with Mike Muller, head of Asia at Vitol Group, a major oil trader, saying that the United States may choose to turn “a somewhat greater blind eye” to Iran’s illicit oil exports if gas prices stay high approaching the U.S. midterm elections.

Where the oil might go is unclear, Esfandyar Batmanghelidj of the Bourse & Bazaar Foundation has pointed out that Western sanctions mean that Russia and Iran are now in direct competition for Chinese contracts—with Russia able to offer a steeper discount.

Israel’s options. While major powers are set to debate in Vienna, Israel, which has its own stockpile of undeclared nuclear weapons, has showed it is happy to take matters into its own hands to prevent Iran from getting close to one.

The assassination in late May of Sayad Khodayee, a colonel in Iran’s Revolutionary Guard Corps, is believed to have been carried out by Israel and comes at a time when the U.S. designation of the IRGC as a terrorist organization remains a major sticking point in negotiations between the United States and Iran.

Following a meeting with IAEA chief Rafael Grossi last week, Israeli Prime Minister Naftali Bennett issued a statement saying that his government “prefers diplomacy in order to deny Iran the possibility of developing nuclear weapons” but “reserves the right to self-defense and action against Iran to stop its nuclear program if the international community fails to do so within the relevant time-frame.”