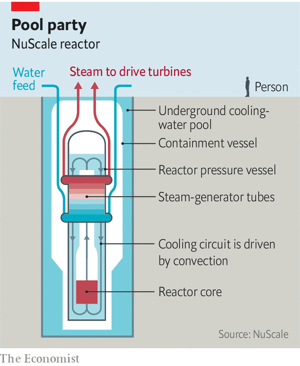 The current energy crisis, highlighted by Europe’s difficulty in weaning itself off of fossil fuels from Russia, has reignited interest in nuclear energy.  Traditionally, nuclear power plants have been large, expensive and take a long time to build.  Some new enterprises have entered the market with what are called small modular reactors.  These would be built on an assembly line and shipped to where the reactor is built.

NuScale plants are designed to produce 77 megawatts of electricity from a tube-shaped reactor that is mostly underground under a pool of water that would automatically cool the reactor if anything went wrong.  NuScale is building a demonstration plant in Idaho.

Rolls-Royce plant produce 470 megawatts of electricity, and are designed more like traditional nuclear reactors, but they are designed so that all parts are small enough to be manufactured off site and delivered by truck.

NuScale and Rolls-Royce plants have the advantage of being easier to license because they rely on more traditional designs, but other companies are working on more unusual designs that use molten lead, sodium, or gaseous helium for coolant.

So far, the cost for these small reactors is not dropping as fast as costs for renewable energy sources like wind and solar, but nuclear has the advantage of being more reliable as a backup for wind or solar, that can carry a baseload of power.